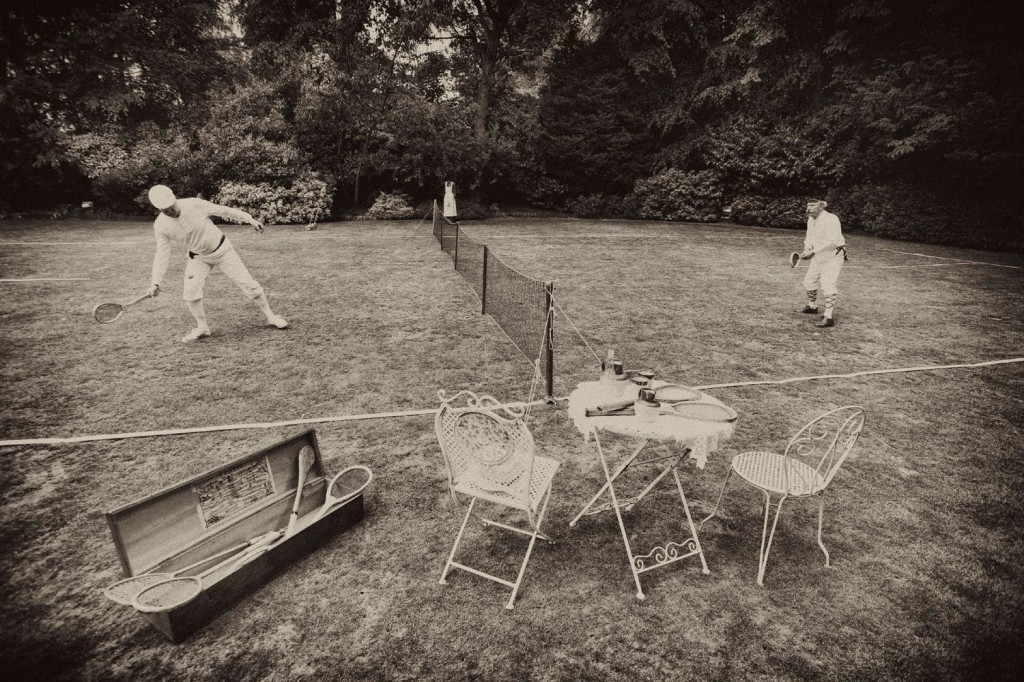 It was in 1859 that lawn tennis pioneer Harry Gem and his friend JBA Perera first experimented with a game recognizably the forerunner of the modern game of lawn tennis and which they called Pelota, in homage to Perera’s Spanish roots. Their experiments took place in the garden of Perera’s home in Ampton Road, Edgbaston, Birmingham. The size of their court may have been largely determined by the space available on the flat croquet lawn at the back of the house and, of course, the size of the court at the Bath Street Racquets Club where Gem was Honorary Secretary and both men were regular players. As Aidan Keane, current owner of the Ampton Road house, says: “Even the size of the modern-day tennis court is in direct correlation to the size of my garden. How mad is that?” 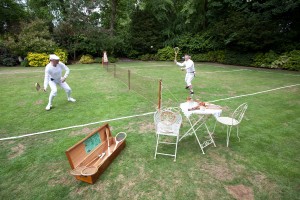 Simple court layout with half divider line in the back of the court echoing that in the game of racquets.

On 25th May 2011 Robert Holland and Chris Elks, two of the trustees of The Harry Gem Project, recreated Gem and Perera’s early game on the very lawn where the pioneers had played over one hundred and fifty years before. Chris Elks, dressed in period costume from his own collection of antique tennis dress and equipment, commented: “This is probably the first time the game has ever been recreated here since the two men played all those years ago.” 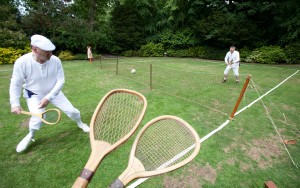 The event marked the anniversary of Harry Gem’s birth on 21st May 1819 and publicised ‘Court on Canvas: tennis in art’ and ‘A Gem of a Game’, two exhibitions running currently at the Barber Institute of Fine Arts at the University of Birmingham (see www.barber.org.uk for details). 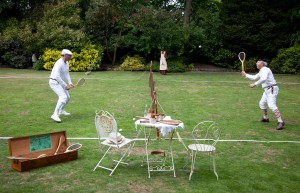 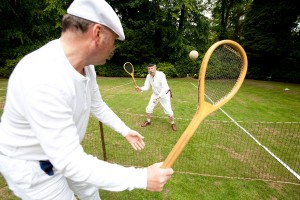 Gem and Perera had long handled racquets with angled heads which they would have used to play at the Bath Street Racquets Club.

The court was marked out following Harry Gem’s original plan, published in his Leamington Club rules. It is three feet narrower than a modern singles court but twelve feet longer and fits still in the original location on the lawn of the modern garden behind the Ampton Road house. The net is four feet high and supported with interim posts to keep the net cord as near parallel to the ground as possible.

Gem and Perera would have used the racquets they played with at the Bath Street Racquets Club, similar to those Chris and Robert are using in the photographs. These have a long shaft and small head set at an angle to the shaft. Notice no grips just plain wooden handles. 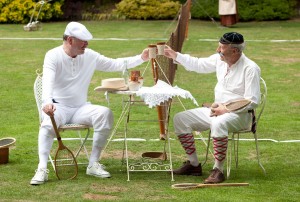 Photographs: © John James for the Barber Institute of Fine Arts.