The purposes of the charity are:

The Harry Gem Project is a member of: 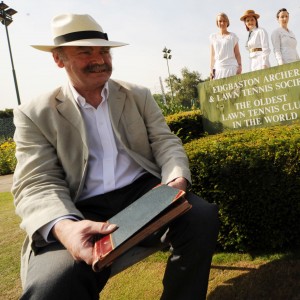 Robert Holland was born and educated in Birmingham, has spent his working life in the advertising and marketing business and lives in Harborne.

Robert was a pupil at St. Philip’s Grammar School and went on to further study at Birmingham Art College and Oxford Polytechnic (now Oxford Brookes University).

His enthusiasm for lawn tennis was nurtured at a very early age on his grandfather’s grass court in Lincolnshire. In the 1960s Robert was a junior member of the Edgbaston Lawn Tennis Club and then a member of Edgbaston Priory Club, the amalgamation of Edgbaston LTC with Priory Tennis Club.

In 1985, after a number of years away from the game, he joined Edgbaston Archery & Lawn Tennis Society, the oldest lawn tennis club in the world. Here he spent most of the 1990s as honorary secretary, for three years he combined this role with that of chairman and is now a Trustee of the Society. He has been also a council member of the WLTA.

Among his many interests Robert is an historian of lawn tennis and passionate about promoting Birmingham’s rightful place in history as the birthplace of lawn tennis.