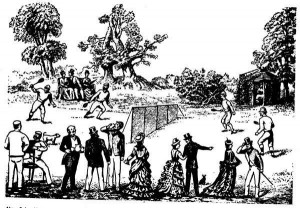 Gem's sketch of himself playing with Perera, against doctors Haynes and Tompkins, at the club they founded in Leamington.

Today, 21st May, is the anniversary of Harry’s birth in 1819. To mark the occasion there will be a re-enactment next week of Harry’s early lawn tennis experiments with his friend Perera in the grounds of the latter’s home in Ampton Road Edgbaston. This is part of the series of events associated with the Court on Canvas and Gem of  Game exhibitions which open on Friday 27th May at the Barber Institute of Fine Arts.